Vancouver, B.C. – The NewsWire – November 2, 2022 – MOLTEN METALS CORP. (the “Company”) (CSE: MOLT), is pleased to announce that it has contracted with Zamgeo, a leading mining contractor in Slovakia, for the reopening of the Vysna adit at its Tienesgrund concession in central Slovakia. Works shall begin this week at site.

The contractor will also provide a bulk sample of the ore dumps at the adit and extract a sample for the mineralised lens within the adit. As Vysna has a historical resource, as per Soviet standards current at the time of calculation (the mid-1950s), Molten Metals Corp. will use the underground sampling to update the resource to the requirements of the Slovak government, and calculate a new (non-NI 43-101) resource to expedite the issuance of a mining license.

The original exploration adit, that shall be reopened, goes straight into the mountainside for some 130 metres where it encountered the vein and then the adit turned east at a 90-degree angle to parallel the large Antimony lens. The LiDar image of the adit and its surroundings is shown below.

The State geologists at the time then calculated the resource and it was added to the national mineral inventory and the adit was sealed. 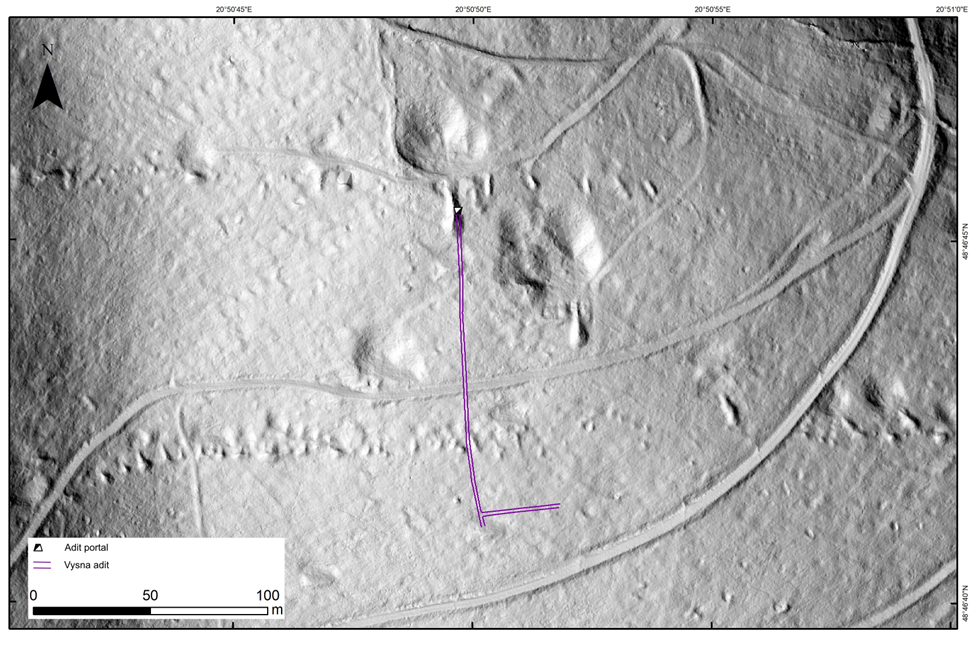 Figure 1: LiDAR image of the Vysna adit and several other historic workings. Surveying by Rodinia s.r.o.

It is the intention of the Company to begin moving the above-ground ore into our facility this week so that we can begin processing concentrates during winter. While the volumes of concentrates are initially expected to be small, and intended for technical purposes rather than commercial, they will be sufficient to get accurate product assays to send to potential off-takers. This is a necessary step for negotiations of both funding and with prospective offtake/trading partners.

Tienesgrund – Spisska Bana (“Tienesgrund”) was awarded to Slovak Antimony Corp. April this year with the goal of processing, initially, the dumps from our Tienesgrund project and reopening the adits over the next year.

The Tienesgrund license covers Antimony-Gold rich veins that run from the upper end of the Bystry Potok Valley and extend to the Štofová Valley with this long-mineralized belt terminating in the Tienes Valley west from Klopta? Hill.

The most famous deposit is Spisska Bana, where the most extensive mining works are located. Mining took place here with several interruptions from 1840-1939. Even later, the site was the subject of mainly exploration campaigns, on the basis of which significant residual reserves were calculated.

Mining and exploration at the Tienesgrund site took place during the same period. Two parallel veins were followed, with several massive lenses of stibnite containing also significant gold grades (up to 9.69gpt Au). One of the lenses was identified in the Vysna exploration adit following the southern vein. Its vertical extent in depth has never been verified.

In July 2022, Slovak Antimony Corp. acquired an Antimony/Tin processing circuit in Eastern Slovakia. The components of the production line have varying daily/ hourly throughputs, but the key ball mill has a rate of 7-15 tpd which essentially dictates the rate at which the whole flowsheet will operate. In October 2022, it rented a facility to house the plant. The facility is currently under refurbishment to accommodate the processing circuit.

Antimony (symbol Sb from the Latin word stibium) is a silvery white metal. Antimony oxide is primarily used in fire-retardant formulations for plastics, rubbers, textiles, paper and paints, whereas Antimony trisulfide is used in the production of explosives, pigments and antimony salts.

It can also be used for producing semiconductors, infrared detectors and diodes. Because of its relative inflexibility, it is usually mixed into alloys for further
application, e.g., manufacture of lead storage batteries, solder, sheet and pipe metal, bearings, castings etc.

Antimony is a strategic metal used to harden lead in ammunition/ordnance and lead-acid storage batteries. Traditionally, Antimony has seen its demand driven by military usage, but this has changed since fire retardants arose to become the main application for the metal.

The latest new technology to utilize the metal is Antimony molten salt batteries for mass storage. The potential here is for a quantum surge in demand if this new technology gains broad adoption.

China has long dominated the production of the metal, however, is suffering declining internal production from mines, but it still dominates the processing of
the concentrates, much of which comes from artisanal sources in the developing world.

As a result of this dominance, Antimony is one of the few metals that registers as critical in all the rankings (US, EU, Canada, JOGMEC, UK & Australia) of criticality of supply.

The Company’s disclosure of technical or scientific information in this press release has been reviewed and approved by Micky Allen, C.Geol., Consultant Geologist to the Company. Mr. Allen is a Qualified Person as defined under the terms of National Instrument 43-101.

Molten Metals Corp. is a mining company exploring for and developing antimony projects. Antimony is a critical element with many industrial applications. For further information, please refer to the Company’s disclosure record on SEDAR (www.sedar.com) or contact the Company by email at brooklyn@moltenmetalscorp.com or by telephone at 778.918.2261.

On Behalf of the Board of Directors

To learn more about Molten Metals (CSE: MOLT), please feel free to reach out to me at any time. For a smaller company developing potentially revolutionary technology, a partnership with a… /NOT FOR DISTRIBUTION TO U.S. NEWSWIRE SERVICES OR FOR RELEASE, PUBLICATION, DISTRIBUTION…